In the past I’ve held several competitions where folks could win the chance to appear in forthcoming novels. Most notably, Keiran Cope won a charity auction to be in the final AUTUMN novel and have his own AUTUMN short story (which you can read here). And way, way back in 2008, The Swimmer was based on a lovely lady called Joanna Milne who won a contest to become a featured zombie in AUTUMN: DISINTEGRATION. Just below you can see Keiran in character (as immortalized by the mighty Craig Paton) and, next to him, The Swimmer (as sculpted by the equally mighty Patrick Crilley). 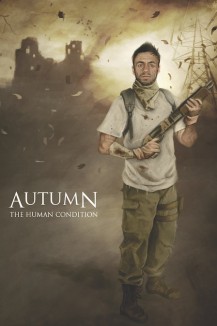 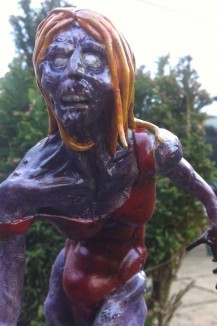 I think another contest is long overdue.

As you know I’m in the middle of writing the first part of a new four book horror/science-fiction series, THE SPACES BETWEEN. I’m offering FIVE people the chance to appear as characters in the books.

One randomly selected winner will:

So what do you have to do? It’s very simple. Visit this page where you’ll find all the necessary information. Good luck!

So here we go. As promised yesterday, here’s Kieran’s AUTUMN short story. Once again, huge thanks to Kieran for his generosity and for being such a willing ‘victim’. Click here to visit www.lastoftheliving.net and read Kieran’s story.

The final part of the lot I put up for auction was to have the winning bidder’s short story illustrated. As you probably know, I’ve been working with the excellent Craig Paton a lot recently, and he seemed the ideal person to produce Kieran’s portrait. You can see Kieran just to the left of this text, and Craig’s beautiful illustration is reproduced below. I’ll be presenting Kieran with a signed print later this year. Once again, thanks to Kieran for his support of the Genre for Japan initiative last year, and thanks also to Craig for producing another piece of top quality artwork. Visit Craig at www.craigpaton.com.

Come back here again tomorrow when AUTUMN: AFTERMATH is launched in the UK at long last. As you probably already know, AUTUMN: AFTERMATH is released in the UK this week. One of the characters in the story is a chap by the name of Kieran Cope, and today I wanted to give you a little bit of background about him.

Cast your minds back to 11th March 2011, and the tragic events which unfolded when a devastating earthquake struck Japan, triggering a tsunami which resulted in damage of almost apocalyptic proportions. In the days and weeks which followed, numerous appeals were launched to try and provide aid to the stricken Japanese people. Genre for Japan was launched – an auction of rare and/or exclusive donations from a number of writers, artists and other genre professionals. I donated a complete set of AUTUMN books, along with the chance to appear in the final novel, and to have a new short story written about the winning bidder.

I watched the online auction with amazement – not just my lot, but all the others too. The sheer amount of cash being pledged was remarkable, with over £11,000 raised in total by the time all the bids were in. And I was thrilled to learn that my donation had gone for £290. The winning bidder was a gentleman by the name of Kieran Cope. I’ll let him explain…

“I was first recommended to read David’s novels by a friend who knew about my love for horror fiction and the human psyche. The first of his novels I read was ‘Hater’ from the Hater Trilogy. I was immediately hooked by the detailed style of writing and the way David places each reader into the size 9’s of the main Characters. After further research I found that David had somewhat of a cult following on-line and soon became of follower of his facebook page and his projects in myself.

Whilst posting a personal facebook message about my shock after witnessing the TV footage of the Japanese earthquake and resultant tsunami I started to wonder how I might be able to help or make a difference. A few weeks later my question was answered I noticed that David had an item up for auction, “Item 58” as part of the Genre for Japan web page, all proceeds going to British Red Cross’s Japan Tsunami appeal.

I was overjoyed when my bid was successful, and after a few days of wondering if it had all been just a dream the reality started to sink in, I was going to have a character based on me in the final book of the Autumn series and an illustrated short story would also be written and published on David’s website www.lastoftheliving.net. Wow!!

Having received a pre-release copy of the final book I can honestly say that I enjoyed it immensely and feel very privileged to have been given the opportunity to be part of what I consider to be a modern cult classic series of novels.

There was one question David asked me during our email correspondence that I found so unbelievably difficult to answer. Did I want to be a survivor or a zombie? And to find out my answer you’re going to have to read the short story and of course the final book of the series Autumn: Aftermath. I promise you won’t be disappointed.”

I guess by now many of you have read AFTERMATH, so you know all about Kieran. What you don’t know is what happened to him on the day the world died, and how he got to the place where we meet him at the beginning of the book. Come back here tomorrow and find out…